Norwegian issuers and Nordic investment banks have played a key role in developing the green bond market. In 2015, Oslo Børs became the first stock exchange in the world to have a separate list for green bonds. “Green finance is a preferred option for many investors. An increasing number of them want to invest in green projects. We want this new list to draw attention to green investment choices," commented Bente A. Landsnes, President and CEO of Oslo Børs, when the green bond list was launched. 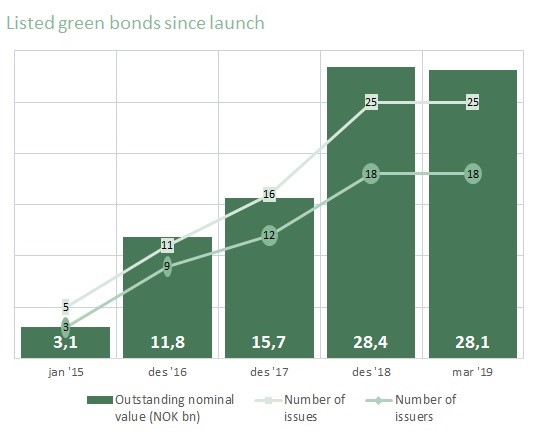 Kommunalbanken ("KBN") has been involved in developing the green bond market on a global scale. Since 2010, KBN has offered a lower interest rate on loans to projects that are part of municipal energy and climate action plans in the Norwegian municipal sector.

In 2013 KBN became the first financial institution in Norway to issue a green bond. "Internationally there is growing demand for climate-friendly investments. With access to major investors and important capital markets around the world, KBN is able to meet this demand and at the same time help Norwegian municipalities to realise their energy and climate action plans," explained Kristine Falkgård, President and CEO of KBN, when the bank listed two issues totaling USD 1 billion in 2015.

Internationally there is growing demand for climate-friendly investments. With access to major investors and important capital markets around the world, KBN is able to meet this demand and at the same time help Norwegian municipalities to realise their energy and climate action plans

The world’s first green mortgage bond was listed on Oslo Børs last year.  “We want to play a leading role in this area and to inspire greater use of this type of bond,” commented Eivind Hegelstad, who is responsible for investor relations at SpareBank 1 Boligkreditt. “There is a growing investor market for green bonds in Europe, which we are seeking to address in accordance with the general approach we have always followed of having as broad and deep a pool of investors for our bond issues as possible,” he continued.

Green mortgages are mortgages for energy-efficient properties. SpareBank 1 Boligkreditt will allocate the funds raised by its green mortgage bond to new and existing residential mortgage loans.

In February 2019, Sunndal Sparebank became the first savings bank to list a green bond on Oslo Børs. Sunndal Sparebank will initially offer loans to private and corporate customers who want to buy vehicles that run 100% on electricity or hydrogen. "We need to take responsibility for increasing awareness and the level of knowledge about climate risk in our communities," commented Jonny Engdal, the CEO of Sunndal Sparebank.

Issuers looking to list on Oslo Børs’ green bonds list are subject to the same listing requirements and continuing obligations that apply for regular listed bonds. In addition, the following requirements apply: