WFE statistics are an important asset for the WFE. They are widely used among researchers, practitioners, journalists and other stakeholders; they are frequently cited in news, reports and academic papers. Given the crucial role the production and dissemination of statistics plays in the WFE value proposition, we believe the WFE team should also provide insights into the statistical properties of our indicators. This piece focuses on a flagship one: equity market capitalisation. This article is intended to review how this indicator can be analysed and/or implemented in wider analyses based on its statistical properties.

To study the statistical properties of equity market capitalisation we obtained monthly time series for the period January 2000 – December 2019 (twenty years of data, for a maximum of 240 observations) for all exchanges reported by the WFE. We collected a total of 114 time series. Sample sizes varied between exchanges as several markets started reporting at a later date. To ensure accuracy of our statistical analyses, we retained time series for exchanges that have at least five years of data (60 observations). This left us with 90 individual time series. We further excluded exchanges the statistics of which were subsequently consolidated into broader exchange group statistics (such as those for individual exchanges comprising Nasdaq Nordic or Euronext), which left us with 75 individual time series. We analysed time series in local currency (as opposed to USD) to avoid considering exchange rate dynamics into the analyses.

The first step in our analysis was to perform a visual inspection of time series plots to infer their statistical properties. A visual inspection allowed us to conclude that most individual time series were characterised by a clear linear trend, either positive or negative (Group 1). A smaller group of exchanges (generally located in Europe) did not show any clear linear trend in their time series (Group 2). Occasionally, time series were characterised by structural breaks  [1]  likely due to changes in market or macroeconomic conditions, though they could typically be bucketed in either Group 1 or 2. A time series pattern from each group is reported below:

Figure 1: Time series pattern of an exchange from Group 1 (with a linear trend) 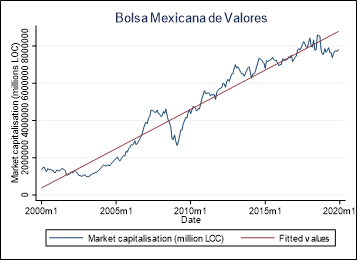 Figure 2: Time series pattern of an exchange from Group 2 (without a linear trend) 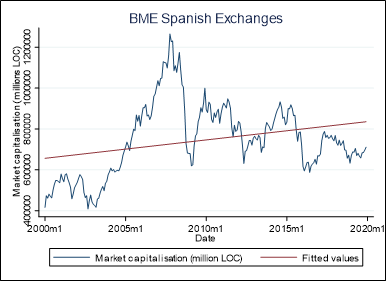 To conclude whether our time series were stationary, we compared and contrasted three different statistical tests: the augmented Dickey-Fuller test, the Phillips-Perron test, and the GLS Dickey Fuller test. Given that time series of market capitalisation were likely to be autocorrelated (i.e. this month’s value might be correlated with the previous months’ values), and that this correlation could influence the results of the tests, we introduced past values of the series in the tests to take this correlation into account. To choose the number of past values (lags) we ran another statistical test.   [2] In many cases, the test suggested that the number of past values to be introduced in the unit root tests was equal to one.

The test results are displayed in Table 1 below: 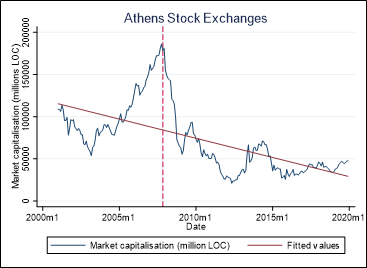 This result should be kept in mind when computing first and second moments (the mean and the variance) of the series, or when performing correlation analyses between those series, given that the computation of all these statistics would be meaningless in the presence of non-stationarity. To correctly utilise market capitalisation statistics, users should take the first difference or the log difference of this indicator, which would likely be stationary and hence characterised by the usual statistic properties [3] or perform analyses that are appropriate for non-stationary time series (cointegration).

[1] A structural is an unexpected change in the intercept term or the slope coefficient of a regression model.

[2] We chose the autoregressive model that minimises the Akaike Information Criterion.

[3] This is true if the series is integrated of order one. While this typically turns out to be true for most financial stochastic processes, in principle one should test stationarity on the differentiated series as well.