Intercontinental Exchange (ICE) owns and operates six central counterparties (CCPs) in North America, Europe, and Asia, with more than 390 unique clearing members. Our CCPs clear a diverse set of exchange-traded and OTC derivatives; we therefore know first-hand the impact clearing plays in the role of risk management for the financial system and, as a result, is mission critical to global financial stability.

The risk-reducing benefits of central clearing have long been recognised by users of exchange-traded derivatives and were the foundation of the financial reforms put forward over the past decade for over-the-counter (OTC) derivatives.

The role of the CCP is to reduce systemic risk by “centralising” and managing risk that exists in the bilateral marketplace. As opposed to bilateral positions, cleared positions are “centralised” in a CCP and the positions brought by the clearing members are risk-managed by the CCP in a highly transparent, disciplined, sophisticated, and regulated manner.

1) they become the seller to every buyer and the buyer to every seller - this provides for multilateral netting across the entire market;

2) they provide an independent mark-to-market price each day for each product they offer and collect collateral to support the cleared positions;

3) they pay and collect the profits and losses for all users.

In a nutshell, once a trade has been matched, a clearing house becomes the central counterparty to the trade, thereby guaranteeing financial performance of the contract. This robust counterparty risk intermediation is critical to supporting the availability of efficient and liquid markets.

CCPs collateralise their cleared positions and mark the cleared positions to market at least daily. Our CCPs have carefully designed margin models and collateral valuation techniques that ensure appropriate collateralisation of market and clearing member risk. The idea being that the funds that we collect as collateral from the clearing member each day should be adequate in the event of a default, without recourse to other resources.

When a CCP is left with no other option but to hold cash at commercial banks, it has happened before that a CCP sometimes finds it difficult to find creditworthy commercial custodians who are willing to hold large amounts of cash. Access to central bank accounts could help avoid such potential market disruptions.

We refresh the valuation of our cleared portfolios, on at least a daily basis, through settlement of variation margin or mark-to-market margin. This practice of requiring clearing members to pay their losses on at least a daily basis serves to avoid the accumulation of large losses over time and clearing members with a position loss are held accountable as the market moves. We monitor positions on a nearly real-time basis and may make additional intra-day margin calls if certain risk thresholds are exceeded.

One of the fundamental obligations for CCPs across the globe is to establish standards and procedures designed to protect and ensure safety of member and client funds and assets and to hold such assets in a manner that minimises the risk of loss or delay in access. Our treasury and investment policies are designed to first and foremost safeguard the principal, provide sufficient liquidity to meet all operational requirements and conform to legal and regulatory requirements.

Where central bank access is available, our CCPs hold cash at central bank depository accounts. To quote from the CFTC’s memorandum dated September 18, 2015, Staff Interpretation Regarding Consistency between Part 39 and The Principles for Financial Market Infrastructures, “one of the most effective ways for a derivative clearing organisation to manage liquidity risk is to use central bank services”.

However, where central bank access is not available, our CCPs make investment choices that aim to minimise market and credit risk and that offers the capability of being liquidated rapidly with minimal adverse price effect, where possible. ICE CCPs engage in reverse repurchase agreements (repo) markets to mitigate risk associated with unsecured balances at commercial banks and rely on more than 60 highly creditworthy and well-diversified commercial banks that are dealers in repo markets to efficiently securitise the cash collateral received from their clearing members. 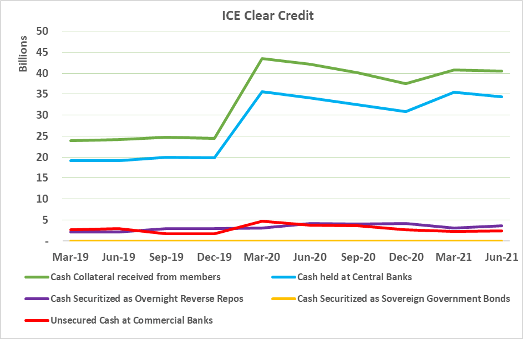 ICE Clear Credit (ICC) has been designated by the Financial Stability Oversight Council (FSOC) as systemically important.[i] Accordingly, ICC is a beneficiary of access to Federal Reserve Bank’s depository accounts and holds all the US Dollar Margin and Guaranty Fund assets received from its clearing participants as collateral at these accounts.

At the onset of COVID-19 in March 2020, when extreme volatility was observed in the marketplace and volumes were at their highest, CCPs collected more margins to cover or collateralise their credit and liquidity risks.

With the increase in collateral, as illustrated above, ICC benefited from the additional safety that comes with central bank depository accounts and was able to place all the US Dollar deposits efficiently at the Federal Reserve Bank without having to worry about how and where to invest or hold all the collateral. A much smaller portion of ICC’s collateral is received in euro-denominated cash. Some of the euro-denominated cash is securitised in overnight reverse repos and the remainder is held as cash for liquidity and operational needs. 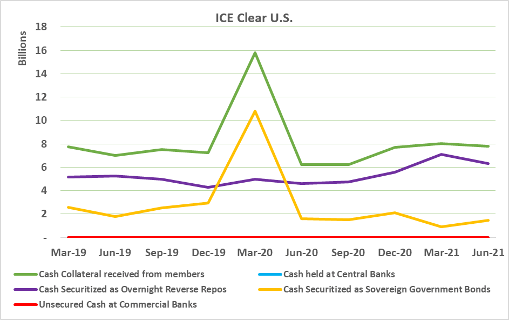 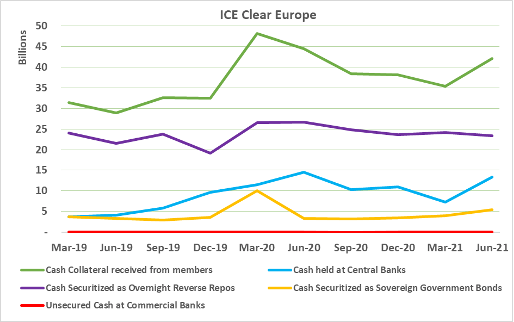 In contrast, ICE Clear U.S. (ICUS) and ICE Clear Europe (ICEU) are not considered systemically important by the FSOC and accordingly were not beneficiaries of the Federal Reserve Bank’s depository accounts. In March 2020, when similar extreme volatility was observed and volumes were at their highest, neither ICUS nor ICEU had the benefit of holding any US Dollars at the Federal Reserve Bank.

ICUS only accepts collateral in the form of US Dollar denominated cash and U.S. Government Treasury Securities, for the purposes of enhanced liquidity. As illustrated in the chart above, ICUS securitised the additional US Dollar-denominated cash aggregating to almost US$8.5 billion in the direct purchase of short-dated U.S. Government Treasury Securities and overnight reverse repos.

ICEU has access to and utilises the European Central Bank (ECB) to deposit EUR cash balances. ICEU also has access to and utilises the Bank of England as a GBP concentration bank and has access to a reserve account at the Bank of England. These funds are immediately available to meet EUR and GBP payment obligations respectively. However, ICEU does not have a US Dollar Federal Reserve depository account and generally had to rely on overnight reverse repos and direct purchase of short-dated sovereign bonds to securitise any cash it could not hold at central banks.

U.S.-based derivatives CCPs, Minneapolis Grain Exchange and Nodal Exchange as well as the UK-based CCP, LCH Ltd., are three other examples of non-designated CCPs who also lack Federal Reserve Depository accounts but handle significant amounts of US Dollar-denominated cash daily in the form of margin and operate extensive collateral management functions to ensure the safety and liquidity of margin they receive, in line with applicable regulation and conservative risk-management practices.

Benefits of having Central Bank access for collateral deposits

From time to time, we face extreme circumstances with high market volatilities and price moves (e.g. the COVID-19 pandemic of March 2020, the Texas winter event, and the European gas crisis, to name a few). A CCP’s role is to ensure adequate and appropriate collateralisation is maintained. What follows is sometimes a spike in margin payments from members.

Where central bank access is not available and our CCPs have to rely on highly secure and liquid reverse repo arrangements to ensure full protection of the pre-funded guaranty fund and margin assets of its members and client assets, it is worth noting that:

(i) the number of creditworthy dealers in the marketplace is limited;

(iii) it may be too late to rely on the repo market where a CCP makes a margin call late in the day;

(iv) we could exceed our diversification and concentration risk appetites;

(v) it is a common practice for the reverse repos to be overcollateralized, typically at 102% to protect the investor from a decline in the price of the securities or to manage the risk of default in repurchase transactions; and

(vi) finding new reverse repo counterparties, especially in the time of a crisis, is extremely difficult. Securing a reverse repo arrangement with a dealer is a time-consuming process and can sometimes take weeks or months before it is tested, live and operational.

When a CCP is left with no other option but to hold cash at commercial banks, it has happened before that a CCP sometimes finds it difficult to find creditworthy commercial custodians who are willing to hold large amounts of cash.

CCPs don’t operate in silos and there is a lot of overlap and interconnectedness between the designated and non- designated CCPs, who share a common network of clearing members and financial service providers. If a counterparty facing a CCP failed or faced a disruption, resulting in a failure of the CCP, there could be downside implications and potential contagion effects impacting overall financial markets.

The interconnectedness – coupled with the fact that ICE’s designated and non-designated CCPs are subject to similar heightened regulations and risk management standards, either through designation or election[ii] to comply – provides a strong basis and rationale for central bank access to be extended beyond systemically important derivatives clearing organizations (SIDCOs) to systemically relevant derivative clearing organizations (DCOs).

If the commercial bank or reverse repo dealer that a CCP relies on is in distress or fails, it is possible that the CCP may not be able to retrieve assets timely. The key benefit of having central bank access is that a central bank can support ease and accessibility of funds, enabling a CCP to store and retrieve cash immediately, meet its payment obligations and significantly limit its liquidity risk.

In conclusion, having central bank depository accounts is widely agreed as the safest option for CCPs to place member collateral and would provide members and their clients with the ultimate reassurance, especially during periods of financial market stress. This would further strengthen the financial resilience of clearing houses, and overall, the financial markets.

[i] The FSOC was established by the Dodd-Frank Act. It is chaired by the Secretary of the Treasury and consists of ten voting members, including the heads of the banking agencies and other federal financial regulatory agencies, and an independent insurance expert; and five non-voting members.

The FSOC designated eight CCPs in the U.S. as systemically important. A systemically important CCP is a financial market utility (FMU), where, among other things, a failure, or a disruption to the functioning of this entity could create, or increase, the risk of significant liquidity or credit problems spreading among financial institutions or markets and thereby threaten the stability of the U.S. financial system. Title VIII of Dodd Frank Act permitted these systemically important FMUs to receive access to depository accounts at the Federal Reserve Bank, where they can deposit US Dollars and receive interest on balances at their depository accounts. The intention behind providing the designated FMUs with depository accounts was to provide a safer and more transparent avenue to collect and hold financial assets, such as margins and guaranty funds.

[ii] ICC is subject to international regulatory expectations set forth in 2012 in the CPMI-IOSCO Principles for Financial Market Infrastructures (PFMI). The PFMIs include heightened regulations and standards for financial resources, risk management, and default rules and procedures. The CFTC’s SIDCO regime at 17 CFR Subpart C was implemented to enhance its CCP regulations to be consistent with the PFMI. A CCP can elect to become subject to the heightened SIDCO regime by following the procedures in 17 CFR 39.31 and adhering to the heightened regulations in 17 CFR Subpart C. CCPs that are not designated or do not elect to be subject to the SIDCO regime are regulated under Part 39. The designated and elected SIDCO CCPs are qualified CCPs (QCCPs) established by the 2012 Basel CCP capital requirements, which created financial incentives for bank clearing members to clear derivatives with CCPs where the supervisory authority has adopted rules or regulations that are consistent with the PFMI. Our non-designated CCPs, ICEU and ICUS, have elected to comply with the same set of more stringent CFTC’s heightened regulatory regime for SIDCOs and subject to similar risk management standards.